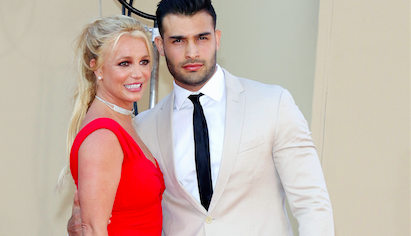 Britney Spears' longtime boyfriend Sam Asghari may have shut down rumors that he is engaged to the pop princess, but he has also kicked up rumors that the two might already be married.

Paparrazo spotted Spears this weekend (July 18) wearing a diamond ring on her finger while collecting her Starbucks drive-thru order. TMZ contacted Asghari to address the rumors that the two had gotten engaged in secret.

"People don't know, but we've been married for about five years. You know, we secretly got married in Hawaii," he trolled the pap before reflecting on the headlines about the supposed engagement. "That's one of the stories that I don't know, but I see it on newspapers. And yeah, we have twins!"

The 27-year-old personal trainer met Spears on the set of her 2016 music video for "Slumber Party" and the pair began dating later that year. Their relationship has been thoroughly documented by the paparrazi over the years, including their numerous trips to Hawaii.

Asghari has actively supported Spears throughout her battle against her conservatorship. He has been seen sporting what appeared to be a #FreeBritney shirt on June 23 while Spears faced the courts to call an end to the legal conservatorship that has controlled her for 13 years. Additionally Asghari has openly criticized Britney's father, Jamie Spears for "Trying to control our relationship" on social media.

"Now it's important for people to understand that I have zero respect for someone trying to control our relationship and constantly throwing obstacles our way. In my opinion Jamie is a total d---," he wrote on his Feb. 9-dated Instagram Story. "I won't be going into details because I've always respected our privacy but at the same time I didn't come to this country to not be able to to express my opinion and freedom."