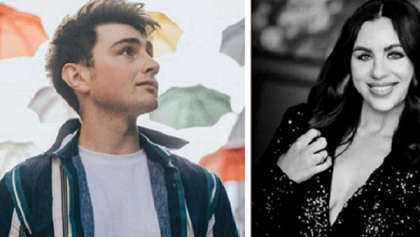 Brendan Murray and Rachel Goode have been confirmed as the first two hopefuls of representing Ireland at Eurosong 2022.

Rachel Goode will be performing her song I'm Loving Me, while Brendan Murray will be singing his track Real Love.

Following a callout for submissions last September, six songs were selected from hundreds of entries that were sent into RTÉ.

Each singer will perform their entry on a special Late Late Show on February 4, with the winning entry chosen by a combination of national/international jury, and public vote. The winner will represent Ireland at the Eurovision Song Contest, which takes place in Turin, Italy in May.

"When I am singing, I am in my own world, nothing else seems to matter in that moment and it's the best feeling ever", Rachel Goode said of her entry.

While Brendan Murray added, "The meaning behind Real Love is not realising what was right in front of you the whole time".

"You've ignored and put the thought of it to one side but then you come to that realization that you should have said what you felt a long time ago" he continued. "You’ve convinced and made excuses for yourself when you really should have told that person how you really felt".

The remaining four entries will be announced this week.