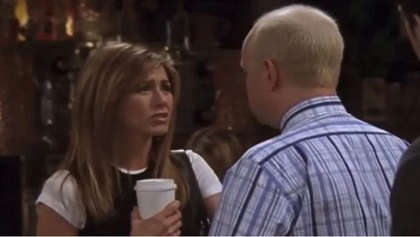 Jennifer Aniston was one of the first to pay tribute to the late Friends actor James Michael Tyler. Tyler who was known for playing Gunther in the sitcom, passed away aged 59 following a battle with cancer.

Tyler was loved by millions of people for his portrayal of the Coffee House manager Gunther. His bleached blonde hair and unrequited crush on Aniston's character Rachel will never be forgotten.

Taking to Instragram, Aniston shared a photo of a scene including her character and Gunther during the final ever Friends episode (The Last One), where Gunter declares his love for Rachel, only to be let down gently.

"Friends would not have been the same without you", she wrote. "Thank you for the laughter you brought to the show and to all of our lives. You will be so missed".

"The size of gratitude you brought into the room and showed every day on set is the size of the gratitude I hold for having known you", Cox wrote. "Rest in peace, James".

Mathew Perry who played Chandler Bing in the sitcom added, "We lost a good Friend yesterday in James Michael Tyler. Gunther, you will be missed. Read in Peace".

We lost a good Friend yesterday in James Michael Tyler. Gunther, you will be missed. Read in Peace.

David Schwimmer who played Ross Geller in the show wrote, "James, thank you for playing such a wonderful, unforgettable role in Friends and for being such a big hearted gentleman and all around mensch off screen. You will be missed, buddy. #JamesMichaelTyler".

Lisa Kudrow who played Phoebe Buffay, wrote, "James Michael Tyler, we will miss you. Thank you for being there for us all. #jamesmichealtyler".

He was also known as the "seventh Friend" in the show due to his longevity.