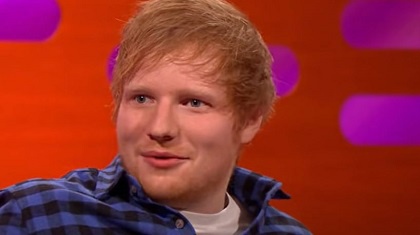 Ed Sheeran released a rendition of "Tiny Dancer", featuring Elton John, Courteney Cox and Brandi Carlile. Sheeran dedicated the cover to Cox's co-star from Friends, Lisa Kudrow aka Phoebe Buffay. You can check the cover out for yourselves below.

Introducing this performance, Sheeran dedicated it to Kudrow, saying "Lisa Kudrow, this is for you". The singer played acoustic guitar alongside Carlile, while Cox joined John on the piano.

During the first episode from series three of Friends (The One With The Princess Leia Fantasy), Kudrow's character Phoebe Buffay claimed that the most romantic song was "the one that Elton John wrote for that guy in Who's The Boss". When she was asked by Rachel (Jennifer Aniston) what the song was called, Phoebe sang "hold me close young Tony Danza".

At the end of the performance, Sheeran said, "Whatever, whatever! Tony Danza, we did it! We did it!”.

After seeing this video, Lisa Kudrow took to Instagram to give a big thumbs up to the session.

"Technically it's 'Hold me close, young Tony Danza, but what you did was great too," , Kudrow joked. "And, including the original song that you wrote, Sir Elton, that was really good too".

"Ahahaha! You’re right Lisa!!!", Cox commented. "Next time we’ll make sure to get the 'young' in there".

Tony Danza even got in on the act, "First “the routine”, now this. You’ve made my day once again! I’m honored!", he said.

The "routine" mentioned by Danza, refers to last week, when Ed Sheeran and Courteney Cox recreated the infamous dance routine between Ross (David Schwimmer) and Monica Geller from seasons 6 episode 10 titled "The One With The Routine".

Here's another chance to see it below.