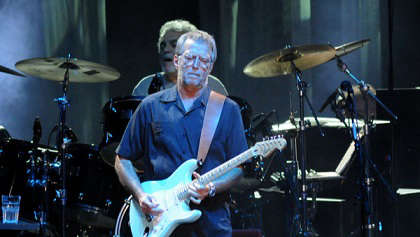 Eric Clapton has reiterated his anti vaccine views on a podcast with Robert F Kennedy Jr called The Defender.

Notorious anti vaccine activist Kennedy bounced his ideas off Clapton on this podcast.

Clapton has always been outspoken on his anti jab views, even teaming up with singer Van Morrison to release anti lockdown track "Stand And Deliver" back in December.

He also continued in his support of Morrison, “It’s been difficult these last couple of years, especially with mainstream media turning. I had been inspired by Van [Morrison] because he came straight out and his reasoning was, ‘We have to make music for people".

He also added, “He’s a crusader, he sees it as his calling. And I thought, ‘That’s right, people are not really acquainted with the idea that this is as important in their healing as any kind of medicine. The whole community thing of people with being together with music".

“Over the last year, there’s been a lot of disappearing, a lot of dust around with people moving away quite quickly, and it has, for me, refined the kind of friendships I have", Clapton said. "And it’s dwindled down to the people that I obviously really need and love".

Clapton also stated “And inside my family that became quite pivotal…I’ve got teenage girls and an older girl who’s in her thirties, and they’ve all had to kind of give me leeway because I haven’t been able to convince any of them. I think my wife is now seeing it the same way as me".