"It Almost Felt Like Time Had Stopped And We Time Travelled!": Jennifer Aniston On Returning To Friends Set 17 Years Later 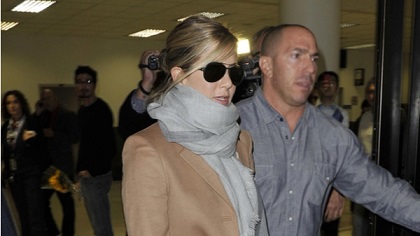 A feeling of nostalgia for some, and an irritation with Cordon’s hosting for others, Friends: The Reunion was strange for all. Jennifer Anniston, who plays Rachel Green in the hit show, described the reunion as being like “a sucker punch to the heart.

Appearing on SiriusXM’s Gayle King in the House programme, Jennifer, 52, spoke openly about the emotional experience of returning. This was, after all, the show which launched her stellar career, and she made a triumphant return to set 17 years after the show came to an end. Since the special aired, Jen has now detailed just how emotional it was to go back to the set that shaped her career.

“It was a sucker punch in the heart in a way. It was for all of us, I think. Even Courteney - we got tears out of.”

Jen admitts she and her co-stars were “very naive in what [they] were expecting”, when returning to Stage 24 at the Warner Bros. Studios. She reveals that she and the gang were overcome with emotion when laying eyes on the same props and set pieces used in the original series.

“We romanticized it, but you also have to remember we haven't been there [since the series finale]. And that time was a very specific time, when we were saying goodbye to something that we didn't want to. But we knew it was the time to say goodbye. Our lives were ahead of us. We had our future ahead of us.”

Anniston went on to mention how grateful she was to have spent time with her former co-stars and that it was an experience she would not be doing again. She said “It almost felt like time had stopped and we time travelled. And there's good in that, and then there's heartbreak in that”.

Jennifer revealed she still struggles to find words to describe the importance the show is to her, all these years later. Speaking to Gayle King on SiriusXM's Gayle King In The House, she explained: “It's really hard to put that into a sentence, except it filled my heart.

“The amount of love that people have for these six characters is something that you can't really explain the meaning of it. Being reminded of the amount of happiness this show brought to people, that's a special thing to be a part of”.

The One Where They Got Back Together released earlier this month, streaming on HBO and Sky, with all principal cast members returning. Several guest stars featured, including Cara Delevingne and Justin Beiber’s fashion shoot.