Jedward Reveal They Have Received Death Threats Over Anti-Monarchy Tweets 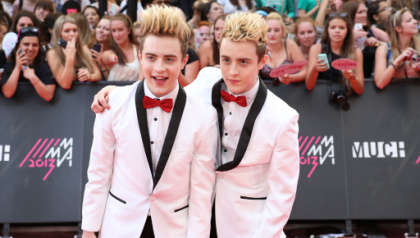 Jedward have revealed that they have received death threats, after they expressed a series of anti monarchy views online following the death of Queen Elizabeth II.

Queen Elizabeth II died at her Balmoral Estate last week aged 96. She was surrounded by her children and extended family. Her eldest son Prince Charles has become King Charles III.

Following the monarch's death, Jedward who comprise of twins John and Edward Grimes posted a series of tweets opposing the Monarchy, including one to give them back the 6 counties of Ulster.

“Please study your History! We haven’t said anything but the facts! King Charles should hand back the six Irish counties on his visit to Northern Ireland – No war! Just words! It’s time", they tweeted.

“Abolish the monarchy and give the people real democracy!", they also wrote.

Following Prince Charles' ascension to the throne, Jedward also added the message "Not my king".

The Dublin pop duo also added, “Hi Royalists – British Imperialism was the cause of the Irish famine and millions of deaths around the world. We mourn for them. Sincerely, Ireland".

They followed this up with another tweet, “Victims of colonisation are entitled to express how they feel! Beyond all the celebratory royal posts & propaganda the majority DGAF [don’t give a fuck]".

Jedward also called for "freedom of speech" after a number of anti monarchy protestors were arrested last week.

Psychos are sending us death threats! Your threatening behaviour and criminality will not intimidate us.

Jedward's social media posts have also been on the receiving end of strong criticism of former Coronation Street actor and native of Northern Ireland, Charles Lawson.

Lawson who played Jim McDonald on the British soap, hit out at Jedward for tweeting  “People in denial about Britain’s Imperialist past need to get a grip. Change is hard when your education is a censored version of history".

Another series of tweets also saw Jedward blast the closing of food banks in Britain to coincide with the Queen's funeral next Monday (September 19).

It’s inhumane cancelling funerals and rescheduling cancer treatments due to the Queen’s funeral! No one should be treated as second class citizens!