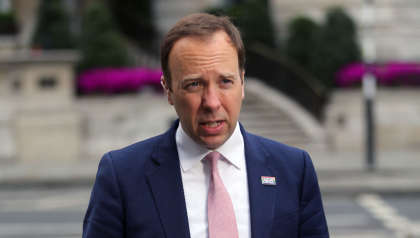 Former Health secretary Matt Hancock has been mocked for referring to Ed Sheeran as his favourite artist on a recent episode of 'I'm A Celebrity....Get Me Outta Here!'

The Tory MP was introduced to the show earlier this week alongside comedian Seann Walsh.

In camp, Hancock struck up a conversation with Walsh, when he asked him about the tattoo on the back of the comic's neck.

Walsh explained that his tattoo was inspired by his favourite band Blink-182, a band that Hancock admitted he was not familiar with. As expected this did not go down well with the viewers of the reality show.

“When I thought it was impossible to hate @MattHancock anymore. He says he doesn’t know who Blink 182 are. Get to f*** you rat b***** #ImACeleb", one fan wrote.

When I thought it was impossible to hate @MattHancock anymore. He says he doesn't know who Blink 182 are. Get to fuck you rat bastard #ImACeleb

Another added, "matt hancock doesn’t know who blink-182 are and that’s all you fucking need to know".

When asked the MP about his taste in music, Matt Hancock named Ed Sheeran as his favourite artists. Lucky Ed!!!

“Quite a mix really, quite mainstream but I’m not gonna put a tattoo of Ed Sheeran on my neck", Hancock told Walsh. “Love him, yeah… and I’m from Suffolk as well".

Hancock then proceeded to sing some of the lyrics of Sheeran's track 'Perfect'.

“You between my arms… barefoot on the grass… don’t get me singing… listening to my favourite song…… What’s it called? ‘Perfect’? I love it", he sang.

This prompted I'm A Celeb co-host Dec to say that Sheeran would be "gutted" to find out about his recently revealed fan.

Following this, one viewer shared footage of Hancock dancing to Sheeran's track, while adding, “Hearing matt hancock sing ed sheeran should be considered a hate crime and a crime against humanity".

“Actually vomming about matt hancock singing ed sheeran and that he’s his favourite type of music", another viewer wrote.

Another added,  “I cannot explain the actual cringe that just went through my body hearing matt hancock singing ed sheeran, get it AWAY".