Síle Seoige Announces She Is Pregnant 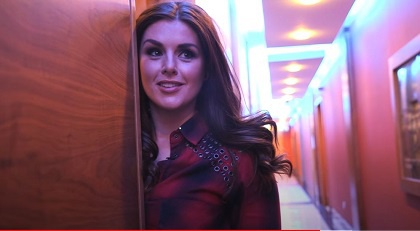 Irish TV presenter Síle Seoige has announced that she is expecting a baby with her fiancé Damien O'Farrell. Seoige and O'Farrell who got engaged in 2018, are already parents to 3 year old Cathal. She also confirmed that the couple are expecting a baby girl.

The TV presenter announced the news during an Instagram Q&A session on Tuesday. Seoige said that she is "overjoyed" by the news.

"My news is that I am pregnant. I am sixteen weeks, I am feeling overjoyed", she revealed.  "At the moment there is a lot baby news on Instagram, which is beautiful, but I also know what it's like when it's something you want yourself".

"Anyone who has been following me for a while knows the past two years for me, on a personal level, have been challenging because I've gone through two miscarriages", she continued.

"I have a baby bump. I have a proper bump. I probably look more than 4 months to be honest", she added. "It’s very exciting".

Seoige had previously suffered a "missed miscarraige", meaning that she did not suffer from any of the symptoms of a miscarriage.

Síle spoke in a recent interview about her difficult experience of her miscarriage.

"It absolutely floored me, it floored both of us", she said.

"It took us a long time before we tried again and we did and I was pregnant," she added.

"I went in at seven weeks for the early scan and I saw the heartbeat and I thought, 'Great, okay it's all good,’ and went back in two weeks later for a nine-week scan and the same thing had happened to me again the baby had stopped growing".

"I just want to be there for her"

Now, Síle Seoige confirmed that she and her fiancé Damien are expecting a baby girl.

"I just want to be there for her and be the best mother to her that I can", Síle Seoige told her followers.

Síle Soeige also thanked people for the supportive messgages she has received on social media.

"I didn't expect to be this emotional. I'm so happy and feeling so lucky but it hasn't been an easy road. Thank you for the messages, I'm always blown away by the amount of support on Instagram".