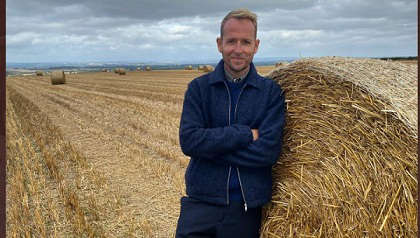 TV presenter Jonnie Irwin has announced that he has been diagnosed with terminal cancer.

Irwin who presents BBC show, 'Escape To The Country', and Channel 4's 'A Place In The Sun', has stated that he hopes to use his diagnosis to inspire others to "make the most of every day".

Initially diagnosed with lung cancer back in 2020, 48 years old presenter Irwin, has revealed that he has been given 6 months to live.

Speaking to Hello magazine, Jonnie Irwin explained how he was initially diagnosed when filming in August 2020, after his vision had become blurry.

"Within a week of flying back from filming, I was being given six months to live", Irwin said.

"I had to go home and tell my wife, who was looking after our babies, that she was on her own pretty much. That was devastating", the father of three continued. "All I could do was apologise to her. I felt so responsible".

Up until this point, Jonnie Irwin had decided to keep his diagnosis private. He has now chosen to make it public, in order to help people with "life limiting prospects" to "make the most of every day".

"I want to make memories and capture these moments with my family because the reality is, my boys are going to grow up not knowing their dad and that breaks my heart", Irwin insisted.

"It's got to the point now where it feels like I'm carrying a dirty secret, it's become a monkey on my back", Irwin said.

"I hope that by shaking that monkey off, I might inspire people who are living with life-limiting prospects to make the most of every day, to help them see that you can live a positive life, even though you are dying".

"One day, this is going to catch up with me, but I'm doing everything I can to hold that day off for as long as possible", the presenter added. "I owe that to Jess and our boys, Some people in my position have bucket lists, but I just want us to do as much as we can as a family".