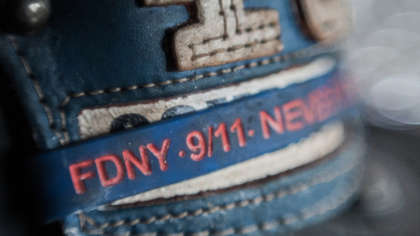 Ahead of the 20th anniversary of the attacks, Cork has paid tribute to New York firefighters who died while tackling the aftermath of the World Trade Center collapse.

A special video tribute sees Mayor of the County of Cork, Cllr Gillian Coughlan joined by firefighters from Cork County Fire Service at the Ringfinnan Garden of Remembrance.

The garden was founded by Kathleen Murphy, a Kinsale native who spent over 30 years working as a nurse in New York. She planted 343 trees with each featuring the name of a fallen New York firefighter.

"The attack on the Twin Towers was one that shocked the entire world, and brought to the forefront of our minds the bravery of first responders around the globe," said Cllr Coughlan, who laid a wreath in the garden.

"From the utter tragedy of 9/11, their bravery shone like a beacon," she said of New York's firefighters. "No matter what evil is perpetrated, or what disaster befalls a community, firefighters everywhere stand ready to respond. Twenty years may seem like a long time, but to the families who lost loved ones, time heals slowly. In Cork, we stand with those families today, and with all those still grieving."

You can watch the tribute in the video below.