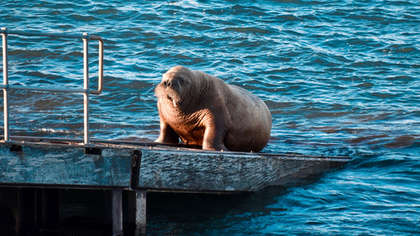 Wally the Walrus, who stole hearts in Ireland during his Cork stopover earlier this summer, has now been spotted in Iceland.

It's believed that Wally is on a journey home to the Arctic.

Wally was first seen back in March as he slept on rocks at Valentia Island. Over the summer months he was spotted off the coast of Spain, France and England before making his way to Ireland's shores.

He was last seen at the end of August in the vicinity of Courtmacsherry and Clonakilty Bay in West Cork.

A walrus seen in Iceland has been identified as Wally by marine experts who examined the scars on his front flippers.

"After 22 days with no confirmed sightings, we were starting to lose hope of ever seeing the young, wandering walrus again," Seal Rescue Ireland posted on social media. "However, we just received notice that a similar-looking walrus was sighted yesterday in Iceland."

"We are absolutely over the moon that he’s not only still alive and well, but he is well on his way home to the Arctic," SRI added. "He was seen swimming back out to sea last night (and even managed to avoid sinking any boats while he was there). Thanks to his ability to feed and rest, he has successfully made the long stretch and will hopefully reunite with his own kind again soon. Please always remember to give wildlife space, and put their safety and welfare first."

#WalrusWatch UPDATE: After 22 days with no confirmed sightings, we were starting to lose hope of ever seeing the young, wandering walrus again. HOWEVER, we just received notice that a similar-looking walrus was sighted yesterday in ICELAND..
Picture: Hafrún Eiríks / Höfn 1/7 pic.twitter.com/ZQLwGtbVol

Wally caused such a stir among the public on his West Cork stop that Junior Heritage Minister Malcolm Noonan was forced to plead with public to "have some cop on" and give the animal some space, as there were concerns that Wally might injure himself if scared by the gathering crowds.