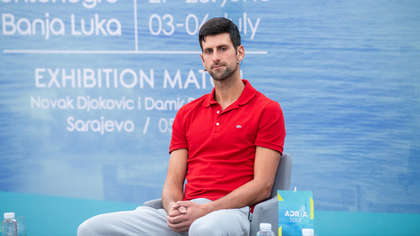 Men's tennis world number one Novak Djokovic's visa has been cancelled for a second time by the Australian government.

Djokovic entered Australia on January 5th. Due to having been recently infected with COVID, he was granted an exemption to the country's strict entry rules around the virus. After being questioned by the Australian Border Force however, his visa was cancelled and he was sent to a detention hotel.

Following an appeal, a judge ruled in favour of Djokovic and it seemed he would be available to play at the Australian Open, which begins on January 17th. Now his visa has been cancelled once again.

"Today I exercised my power under section 133C(3) of the Migration Act to cancel the visa held by Mr Novak Djokovic on health and good order grounds, on the basis that it was in the public interest to do so," Hawke said. "This decision followed orders by the Federal Circuit and Family Court on 10 January 2022, quashing a prior cancellation decision on procedural fairness grounds."

"In making this decision, I carefully considered information provided to me by the Department of Home Affairs, the Australian Border Force and Mr Djokovic," he continued. "The Morrison Government is firmly committed to protecting Australia's borders, particularly in relation to the Covid-19 pandemic."

Djokovic will be interviewed by immigration officials on Saturday.