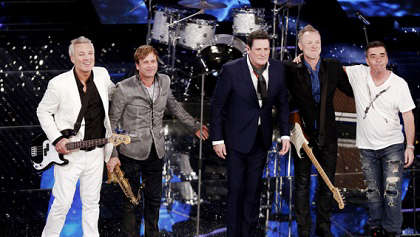 Spandau Ballet founding member, Gary Kemp has revealed Tony Hadley was picked as their lead singer for his visual qualities as opposed to his vocal abilities.

Kemp explained that Hadley was invited to join the band because he was "the tallest bloke in the school and he was the only one with a leather jacket".

Gary Kemp formed Spandau Ballet with Steve Norman, while they were still in school.

Spandau Ballet are of course known for their 1980s hits "True" and "Gold", with Hadley going on to be hailed as one of the best voices of British pop music. Kemp was lead guitarist and also provided backing vocals.

Earlier this month, the dates for Tony Hadley's UK solo tour, celebrating his 40 year career in music were confirmed.

🎤 @TheTonyHadley will be celebrating his 40 year career in music in his 2022 on his UK Anniversary Tour!

Tickets are available at https://t.co/w2WY1hcoZt

Gary Kemp explained why he chose not to be the band's lead singer.

"When we started, Johnny Rotten was happening and we were big fans of The Who", he said. "We wanted a lead singer and Tony Hadley was the tallest bloke in the school and he was the only one with a leather jacket. It just so happened he could sing as well".

Kemp himself has recently released his own solo album "InSolo" last Friday. Included on the album is the single "Too Much". For that track, Kemp collaborated with Queen's Roger Taylor. Check it out below.

Speaking about his recent recording history, Gary said that "turning 60 was a big deal and I found myself writing a lot of songs".

"A lot of pop songs tend to be about young love", he added.

He continued, "Rock stars in their 70s sing about meeting some girl and I just started to write songs that were much more from an older perspective and looking back on your life and your relevance now, not being as strong and as powerful as you used to be and that can be written about as well, I thought".

Gary Kemp also paid tribute to David Bowie, saying that the late singer had a big influence on him.

"Everything that had gone on in the 60s, that was their generation and it was no longer shocking", he said. "Bowie came along and it was totally outrageous for my parents".

"I think he introduced theatre into music and we realised that you didn’t just have to be a musician to be theatrical and to be dressed up and be different", he added. "You can just be a kid on the street".