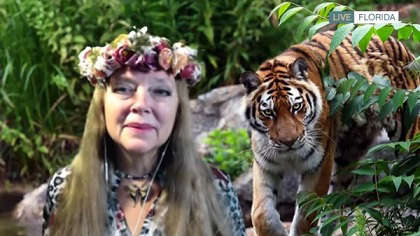 Tiger King star Carole Baskin has reacted to claims that her former husband is alive and well, having apparently been found in Costa Rica. Six years after marrying Baskin, Don Lewis went missing in 1997 and later legally declared dead in 2002.

In the first season of Netflix's smash-hit Tiger King, producers explored the possibility that Baskin could have been responsible for Lewis' disappearance - something she has vehemently denied. However, the latest season, which Baskin is demanding Netflix removes her from, reportedly reveals that Lewis is alive and living in the Central American country of Costa Rica.

Sharing her reaction on ITV's This Morning, Baskin said producing a letter from Homeland Security is “one of the really exciting things that came out of Tiger King 2”. According to Baskin, the letter revealed that “a special agent in charge with the FBI at Homeland Security reached out to the sheriff's detective George Fernandez.

“Which means; this had to have happened after 2002, because Homeland Security wasn't even around until 2002. And they said that my husband, Don Lewis, is alive and well in Costa Rica!”

Baskin seemed concerned with this fact, as they had this information the whole time and “all of this has been made about me having something to do with his disappearance”. She adds that she did not think Lewis had been capable of supporting himself after he “took about a million dollars down into Costa Rica.

“And when we recovered what we could out of that years later, it was only about $80,000 because the investments he had made were so bad. So, I don't know how it is that Homeland Security says he's alive and well in Costa Rica but I'm glad to hear it.”