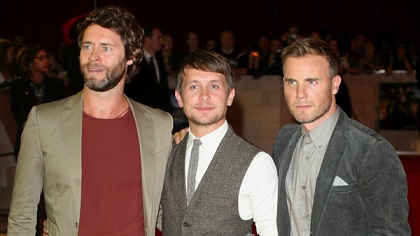 Take That fans may not need to wait any longer for a reunion with their 90's heart-throbs, with Gary admitting the band is "desperate to come back"

Take That lead singer, Gary Barlow has hinted that the band could be back on the road sooner than expected. The Want You Back singer revealed the band is “desperate to come back and do something” but must wait for the end of pandemic restrictions, adding: “as soon as big venues are up and running again”.

In an interview with The Sun, the star claimed the band is “going nowhere”, although he is unsure what form their comeback will take. Gary, 50, said he does not yet know “what it will be yet, whether it's a tour or album, or both even. But Take That are going nowhere!”

The last time Take That took to the road was for the band’s 30th anniversary tour in 2019, commemorating the release of their greatest hits record. Speaking to the paper, Gary revealed his hopes of embarking on a similar tour upon their 40th anniversary.

Gary, 50, Mark Owen, 48, and Howard Donald, 50, have continued the band since Robbie Williams, 46, and Jason Orange, 50, left to focus on their music careers and personal lives. The band originally formed in 1989, going on to achieve 12 number one singles on the UK Singles Chart. They also had success with eight number one albums, ranking them as the most successful boyband in UK chart history.

Gary can be seen on BBC One, from next week, with his new show, I'm With The Band, airing June 4th. Gary - who delighted fans with his crooner sessions during lockdown - will mimic the setup of his much-loved lockdown entertainment. Gary's Crooner Sessions saw him perform virtually with the likes of Cliff Richard, Jessie J and Niall Horan - to name a few.

This once-off show will see Gary joined by several famous faces to perform as a band. The lineup includes McFly's Tom Fletcher and James Bay on guitar and vocals, with Jamie Cullum on piano. Other famous friends to drop by consist of Craig David, Anne-Marie, DJ Nathan Dawe and rapper Mostack.

Discussing his new show, Gary said: “A key reason for me doing this show for BBC One was that I just wanted to get in a room with a load of people I love and respect and play music. We're aiming to give artists a platform and place where they can perform and have fun. It's simply a musical treat for everyone who loves watching the best musicians performing great songs from any genre and any decade.”