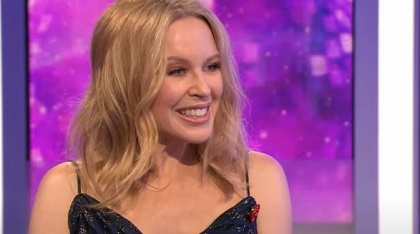 Kylie Minogue has released a cover of Lady Gaga's single "Marry The Night" as part of the Poker Face singer's 2011 album reissue.

Minogue had teased fans about a possible cover of Lady Gaga's track recently, by posting a brief video of herself on Twitter.

“hey @ladygaga…what are you doing tonight?”, she wrote alongside a crescent emoji.

Hey @ladygaga 💜 what are you doing tonight? 🌙 pic.twitter.com/Yihn9SAWDs

Minogue has been busy recently. She did the vocals for Years & Years' latest track "Starstruck".

She also confirmed that she is also working on new music with fellow disco revivalist Jessie Ware.

Minogue's cover of Lady Gag's album is the third track to be released since the record was reissued. Orville Peck released a "country road" version of "Born This Way", while Big Freedia released a cover for "Judas".

The reissued album is due for release on June 25. The orginal album will be rereleased along with six new versions of existing tracks.

We can expect to see new versions of "You and I", "Highway Unicorn (Road To Love)"  and "The Edge Of Glory".

You can preorder the album here.

Kylie has since confirmed that her cover of "Born This Way" has been officially released.

This morning she tweeted, "Surprise! My version of @ladygaga's Marry The Night is out now!  Join me in celebrating the tenth anniversary of Born This Way. Time to dance".

Surprise! My version of @ladygaga's Marry The Night is out now! 💜🌙 Join me in celebrating the tenth anniversary of Born This Way. Time to dance #LOVERS! https://t.co/svA6iGM6oY pic.twitter.com/hMI1TUqxYg

Here's the tracklist for "Born This Way 10th Anniversary".