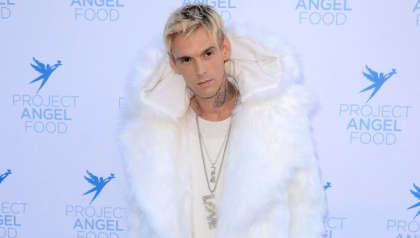 The manager of the late singer Aaron Carter has called the release of his memoir and latest album "heartless money grabs".

Aaron Carter whose brother is Backstreet Boys member Nick Carter, was found dead at his home in California last week (November 5), after his house sitter found him unresponsive in his bath at some time after 11am.

Earlier this week, it was revealed that Aaron Carter had been working on his upcoming memoir, consisting of three years worth of interviews between Carter and author Andy Symonds.

The book titled '(My Father’s Son): Aaron Carter: An Incomplete Story Of An Incomplete Life', is to be released next week (November 15).

Along with his memoir, the singer's posthumous album 'Blacklisted' was also released via producers John Wyatt and Morgan Mathews. “We decided to release ‘Blacklisted’ tomorrow to honour him and share his exceptional artistry with his fans around the world as we all mourn his loss", the pair stated.

The release of the memoir and album has come in for some stern criticism from Carter's manager Taylor Helguson of Big Umbrella Management, who described it as "obsecenely disrespectful".

Helguson echoed the words of Carter's girlfriend Hilary Duff, who released this statement, “It’s really sad that within a week of Aaron’s death, there’s a publisher that seems to be recklessly pushing a book out to capitalise on this tragedy without taking appropriate time or care to fact check the validity of his work".

Sharing Duff's outrage, Helguson also added, “In the few short days following our dear friend’s passing we have been trying to grieve and process while simultaneously having to deal with obscenely disrespectful and unauthorised releases including an album, a single and now it seems a book".

“This is a time for mourning and reflection not heartless money grabs and attention seeking", he continued. "We would ask the parties responsible to remove the aforementioned content and that no further content be released without approval from his family, friends, and associates".

Paying tribute to his brother, Nick Carter said, “Sometimes we want to blame someone or something for a loss, but the truth is that addiction and mental illness is the real villain here".

The Backstreet Boys also honoured Carter at a recent concert, by playing an in memoriam video of the singer playing during their performance of the track 'No Place'.

Backstreet Boys pay tribute to Aaron Carter at their show in London. pic.twitter.com/0MKzwwdOgq