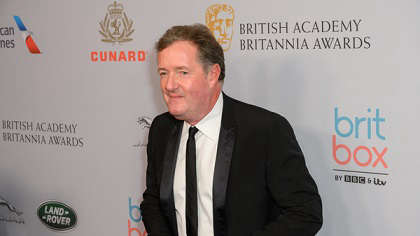 In his column for the Daily Mail, Morgan was critical of Adele's decision to include her young song in a song about her divorce from husband Simon Konecki. He claimed that Adele did this for "attention, money and sales".

Morgan started with the scathing headline, “Sharing your young son’s heartache and pain with the entire world to flog your album is shameful and the rankest hypocrisy".

Piers Morgan branded the singer's decision "shameful and hypocritical", considering that Adele had previously battled to protect her son's privacy.

The former presenter of Good Morning Britain could not resist mentioning Meghan Markle, comparing Adele to the Duchess of Sussex.

He wrote, “Of course, all this hypocrisy is par for the course with today’s over-sharing celebrities who love to reveal every prurient detail of their lives for commercial gain, whilst simultaneously demanding ‘privacy’".

“In fact, Adele’s behavior is straight from the Meghan and Harry playbook, right down to invading her own privacy to America’s foremost TV therapist, Oprah Winfrey," Morgan continued.

"However, it’s one thing to flog one’s own privacy in such a shamelessly two-faced fashion, but quite another to flog your child’s, too".

Morgan went on to criticise Adele for including voice recordings of, “incredibly intimate conversations with her son in which he tries to stop her crying during as her short-lived marriage unravels".

“This is the same Adele who went to court to protect her son’s privacy when he was just one, winning him a substantial five-figure sum in damages over paparazzi photographs that Angelo was too young to know had even been taken".

"But how does Adele’s determined battle to seek privacy for her son sit with her now using him in such a shameless way to flog her album?”.

Despite also hailing her as a "gutsy, honest young woman with a brilliant voice", Morgan did conclude by stating in his piece that Adele has, “crossed a line by exposing her young son’s innermost feelings to public scrutiny in such a soul-baring, intimate way".

It was a ride, so I threw my arms up and screamed! Love you all ♥️ https://t.co/QyxTf5ciTM pic.twitter.com/9nFsgNX5TS