Garth Brooks Finally Addresses The Rumours of His Return to Ireland 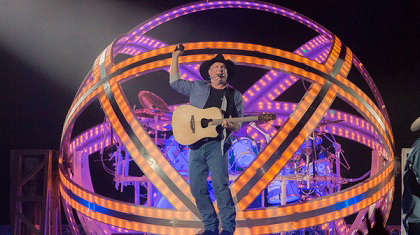 Country singing legend, Garth Brooks has finally spoken out on his rumoured return to the Emerald Isle

Garth Brooks has addressed the rumours of his return to Ireland and admits his desire to come back to the Emerald Isle. It has been seven years since Brook’s cancellation of a five-night stint in Croke Park, and the Country singer is looking to reconcile. According to the man himself, Brooks is saying he would be the ‘luckiest guy on the planet’ if he is granted permission to perform a string of shows here.

According to reports, the finalisation of negotiations is underway for the singer’s return at Croke Park in September 2022 for a series of gigs. Best case scenario, Brooks will host Croker for three nights, with the possibility of further dates.

In a livestream video on his Facebook page the 59-year-old responded to a question by Irish ‘super fan’ Mary Ryan. “Hope to see you in Ireland and would love to get the chance to say hello. We hope to see you sometime next year,” she said.

Brooks feels that the Irish have “so much love and sincerity”, and claims that Ireland is “the place to play”. However, the singer has revealed that there is yet to be confirmation on the go-ahead for his return.

“I have to look into the camera and tell you this: I have heard these rumours since 2014. I don’t know where they sit at this point,” he said. “If I do get to play and go back to Ireland and play music again, we will be the luckiest people on the planet. And I promise you; the second I know whether or not it’s going to happen or not I will let you know.”

Garth’s assistant passed recognition onto the Irish crowd for their love and support for the singer, saying, “If love comes in the version of an Irish flag, you have a lot of it because it’s just filled.”

This garnered a flattered response from Garth who said: “I’ll tell Ireland if you love me one billionth as much as I love you, I’m the luckiest guy on the planet. I love Ireland.”

Although Brooks has finally addressed the rumours of his return, he did not confirm the length of dates he intends to play. Nor has any official confirmation come from Aiken Promotions, Dublin City Council, or representatives of the country music legend as of yet.

Frantic fans of the singer flocked to gobble up the five available dates in Croke Park, before Dublin City Council dropped the bomb that it would only grant a licence for three of the five performances. The 59-year-old insisted at the time that he would play all five shows or none at all, sparking protests among fans nationwide and political discussions. Following negotiations, the decision was made to cancel all five dates, refunding 400,000 tickets to disgruntled fans.

Let’s just hope that things go according to plan, and fans can finally have the chance to see their long-awaited hero perform.