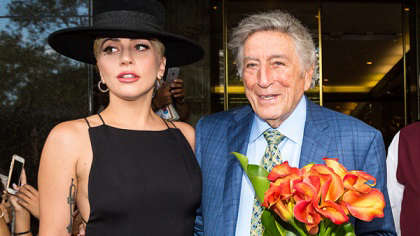 Lady Gaga and Tony Bennett are coming to MTV Unplugged in December and you can catch the first promo inside!

Ladies and gentlemen, Mr Tony Bennett and Ms… Lady Gaga have been announced to perform on MTV Unplugged on December 16th. MTV revealed the announcement on Sunday, and you can watch the first promotional video below.

Marking the return of MTV’s Unplugged franchise, this episode had been filmed in New York earlier this year. The elegant duo performed tracks from their top ten album, Love for Sale, which has earned six 2022 Grammy nominations – including Album of the Year.

Topping Billboard‘s Traditional Jazz Albums and overall Jazz Albums charts since its September debut, the album follows 2014’s Cheek to Cheek. Airing 9pm ET (2 am Irish time) on the US MTV channel, and across its global platforms, MTV Unplugged: Tony Bennett & Lady Gaga takes place during Love Music With MTV. The month-long celebration will show MTV’s top music series and moments, from the VMAs to Unplugged.

The MTV Unplugged episode is part of a talent deal Viacom announced with Bennett and Gaga, which also includes the Sunday night CBS concert special One Last Time: An Evening With Tony Bennett and Lady Gaga, where the promo below first aired. Also included in the partnership is the upcoming documentary The Lady and The Legend, which will stream on Paramount+ in 2022.

This is not the first Unplugged session for the philanthropic Tony Benefit as the show star previously recorded a special and accompanying album in 1994, which went on to win album of the year at the 1995 Grammys. However, this performance was Lady Gaga’s first ever on the show.