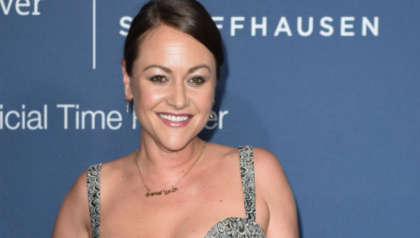 It has been confirmed that Jaime Winstone will play Peggy Mitchell in a flashback episode of EasEnders.

According to a spokesperson for the British soap, Jaime will play Peggy Mitchell in an episode which centers around the iconic Mitchell family.

The episode will bring viewers back to the winter of 1979, where the Mitchells' were "hit hard by a Britain in economic turmoil", with Peggy's marriage to her husband Eric "showing its cracks".

The storyline itself sees Phil Mitchell (Peggy's son) and husband Eric "vying for the title of man of the episode".

Fans of the soap will also be taken on a journey through Phil's youth, while present day Phil continues to face mounting pressure from DCI Keeble, following his return from prison.

Jaime Winstone who is the daughter of actor Ray Winstone, will take up the role of Peggy Mitchell, a role which been played by the late Barbara Windsor, who passed away in December 2020, following a long battle with Alzheimer's disease.

"Playing this role has really cemented my love and admiration for Barbara as I got to bookend my journey by playing Peggy Mitchell – I hope I’ve done her justice and I’ve loved every minute of it, I can’t wait for everyone to see the episode".

This episode will feature characters who have never been seen on screen before, including Eric Mitchell played by George Russo, Billy Mitchell's older brother Charlie (Charlie Hepstinall), and Dean Roberts who will play Billy and Charlie's father Stephen.

"We’re delighted to be welcoming an incredible cast of actors to set for this special flashback episode, including the luminous Jaime Winstone as a young Peggy Mitchell", said Chris Clenshaw, executive producer of EastEnders.

"Focused on the Mitchell family, audiences will embark on a rollercoaster journey to the East End of London in 1979 where they’ll delve into the family’s past, seeing much-loved and iconic characters, as well as meeting characters from the show’s history that have never been seen on screen before".

"There are twists, turns and secrets revealed – after all, trouble is never too far away where the Mitchells are concerned".