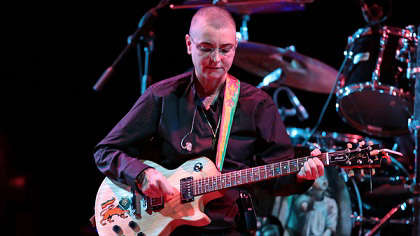 Sinéad O’Connor has criticised authorities for the death of her 17-year-old son, Shane, alleged to have left hospital while “on suicide watch”. The singer took to social media over the weekend to announce the tragic news of her young, late son.

“My beautiful son, Nevi’im Nesta Ali Shane O’Connor, the very light of my life, decided to end his earthly struggle today and is now with God. May he rest in peace and may no one follow his example. My baby. I love you so much. Please be at peace.”

Shane had been reported missing two days before his death, with Garda Síochána launching an appeal for his whereabouts. Originally missing from Newbridge, County Kildare, Shane had been seen last in the Tallaght area on Friday morning. Sinéad had previously alleged Shane was “on suicide watch”.

Following the confirmation of his death, the singer condemned authorities such as HSE and the child and family agency, Tusla – for their “refusal to accept responsibility”.

“26 hours after my son died in so the so-called care of the Irish State in the form of Tusla, I have yet to receive any contact from Tusla or their representatives. I was informed by Gardai of my son’s death and later I spoke with the GAL. No contact from Tusla is unacceptable.”

The singer posted again to report she had “formally identified the remains of my son”, adding: “May God forgive the Irish State, for I never will”.

In another tweet, she said: “Now Tusla want to discuss with me ‘a media release’ no doubt wishing to have me join in their efforts to make this death of my child seem like it wasn’t at the hands of the Irish State.”

A spokesperson for HSE said the service “cannot comment on individual cases when to do so might reveal information in relation to identifiable individuals, breaching the ethical requirement on us to observe our duty of confidentiality.”

Shane was one of four children, leaves behind siblings Jake Reynolds, Roisin Waters and Yeshua Francis Neil Bonadio. Sinéad later dedicated a Bob Marley song to her late son, describing him as her “blue-eye baby”, and the “light of my life”.

Sinéad has been inundated with thousands of messages of condolences, including public figures and fellow grieving mothers who have gone through similar ordeals.

“Sinead you have always been there for me and for so many people, you have been a comfort & a soul who is not afraid to feel the pain of the suffering,” Pogues singer Shane MacGowan tweeted. “You have always tried to heal & help. I pray that you can be comforted & find strength, healing & peace in your own sorrow & loss. He was a beautiful boy and I loved him. I pray that he can be at peace and also be able to stay connected with you.”